Dreams must come a reality at some point and 2018 is when I’m going to make it happen.

I’ve been dreaming about getting out of good ole Wisconsin for too long. As winter is rolling around the corner here, I am reminded now more than ever of how badly I want to wander to a new state and experience things Wisconsin doesn’t have to offer.

No ifs, ands, or buts will change things for me this year!!

I am interested in getting some insight from my other blogger friends out there as to what worked for you to make sure you could make your dreams come a reality!

I’ve had post after post explaining my love for travelling and yearning for needing to pick up and go. I truly can’t explain the feeling of knowing there are bigger and better things out there. I feel as though I’m meant to explore and to travel places to truly understand myself and find my place in this big beautiful world. I have such a passion to travel, discover, and learn more about myself and places around the world as I do so.

I wish that I could pick up and bring my friends and family with me to ensure nothing could ever hold me back!

I want to go everywhere..

All the way to internationally..

Every city, every state, every territory, and everyone continent.  I could go on forever!! Why can’t I go everywhere?

I’m twenty-one, working a full-time job, and about to graduate college. My time to travel is now, yet I sit here and only dream of it because of little things that hold me back. I know one day I will get the chance to visit all of these amazing places and more. And when that day comes, I hope it’s more than just visit. I want to be able to live, to experience, and to truly submerge myself into another culture. I want to sit at a little coffee shop somewhere across the world. I want to travel the street of somewhere unknown. I want to discover little hidden beaches. I want it ALL.

I can’t wait for my time to come, because when it does, I WILL be ready.

Lately, I’ve been stuck in a routine that I just can’t seem to break…

I’ve recently signed a 6 month lease, picked up and moved, and am currently living away from home (even though it’s only 45 minutes away from home).

Now I have 4 months until I graduate and have no idea what I want to do when the time comes. Part of me wants to pick up and move far away to some big city or find a job that allows me to travel and get paid to do so, while the other part of me doesn’t want to miss out on what’s going on here at home. I can’t seem to catch a break (or clearly just make my mind up).

Life is too short to do anything that doesn’t make you happy, which I will preach until the day I die. So why am I still where I was a year ago?

The real question though… when will I be able to travel again??!

Still a question I am looking to find an answer to.. Big changes are coming. Stay tuned.

All I have ever wanted is to travel and see the world. Since I’ve started travelling more often and following the journeys of other travel bloggers, wanderlust has kicked in more than ever.

Currently, I’m stuck in a rut of working full time and going to school full time… Why can’t I just pick up and start the life I’ve always wanted?

If I could work remotely and traveling was free, you’d never see me again!! The real questions is: How do some many travelers get the opportunity to get paid, blog, and travel? They are living the life.. I could only dream to have an opportunity at that lifestyle!

If anyone reads this that has been through this and able to get a chance at those opportunities, please share your experiences, tips, and/or recommendations!!

How to pick up and move to a big city post graduation? That is the question that I have been pondering for some time now. In just six short months I will be graduating with my bachelors degree in Business Administration with an emphasis in Marketing & Human Resources. With that being said, I’m so glad to see the light at the end of a long tunnel. Where do I go now?

I’ve always had high hopes of wanting to pick up from my little small town in Wisconsin and move to a big city or somewhere near the beach. There are so many places and so many opportunities out there! Now is the time to go!

I’ve always had a feeling that I couldn’t explain. A feeling of not belong or knowing that you are meant to be somewhere else in the world. Hence my big dreams of wanting to experience the city life. I will be there one day!!

Does anyone have and tips on picking up and moving and/or living in a big city?

How did you plan for it? How did you choose a city? Any recommendations?

To go or not to go….. The question remains open. I have just a few short  months left to figure it out!!

Starting a blog is something that I’ve always wanted to do, for myself and to share my adventures with others. Wanderlust has been so real the last few years of my life. I’m twenty-one years young and even though it feels as though my life is just starting and I have many adventures yet to come, I also feel like these are the most important years of my life.

I’m thankful for every opportunity I have to travel because it has helped my see the world from so many different perspectives.

I love the world and all its beauty. I am so intrigued to travel to every place in the world and experience it all, so that is just what I’ll do. My desire to travel overwhelms me at times, which is why I absolutely love looking at other travel bloggers Instagrams and blogs! I also tend to sit on Pinterest for hours under Travel, dreaming of the place I have yet to travel. What can I say? It’s an obsession that I can’t stop!

So, again I preach, always always always follow your heart. Don’t question your dreams, follow them! Find your fire and never let your flames dull. YOU are capable of ANYTHING you get your mind to!!

To say the least, Vegas was one of the most interesting trips I’ve ever went on and I was only there for a short three days. Before going to Vegas, I had no idea of what to expect. But when people say that Vegas never sleeps, they aren’t lying!

DAY ONE: First up, drinks and Food, duh! After dropping our bags off at our hotel, the Luxor, my girl friends and I get ready for the crazy night one in Sin City. Of course we decide upon a nice up-scale Mexican restaurant with margaritas, always my go to! Had the most fantastic Mexican salad and a lovely pitcher of strawberry margaritas, which was delicious. Post dinner, we decide to take on Fremont Street to see the old strip.

Top Activities: People watching, which brings amusement to the whole night, lots and lots of Angry Orchard Cider, a few different casinos, and many different light shows! After exploring Fremont Street we end up at Mandalay Bay at a rooftop party. The views were nothing short of amazing with the whole city lit up by lights. In short, night one was such a great experience.

DAY TWO: Up bright and early to make sure we get a spot at the pool with a scorching high of 100 degrees anticipated. Then off to a brunch with MIMOSAS, just about the best drink ever invented. Cheers to Vegas! Post breakfast we are off to a day at the pool.

After many hours at the pool. tons of laughter, ice cold drinks, and many applications of sun screen we decide to hop over to another pool party at Mandalay Bay again. With an awesome DJ playing and many more drinks, we lose track of time and get just a bit too sun burnt…. But Las Vegas never sleeps! So, back to the Luxor we go and it’s time to get ready for the night! What better than hitting up the most talked about night club: The Marquee in the Cosmopolitan? After getting back to the hotel and getting ready we hop in the Uber just in time to make it to the night club! More dancing than your could ever imagine went on and I don’t regret one moment of it! 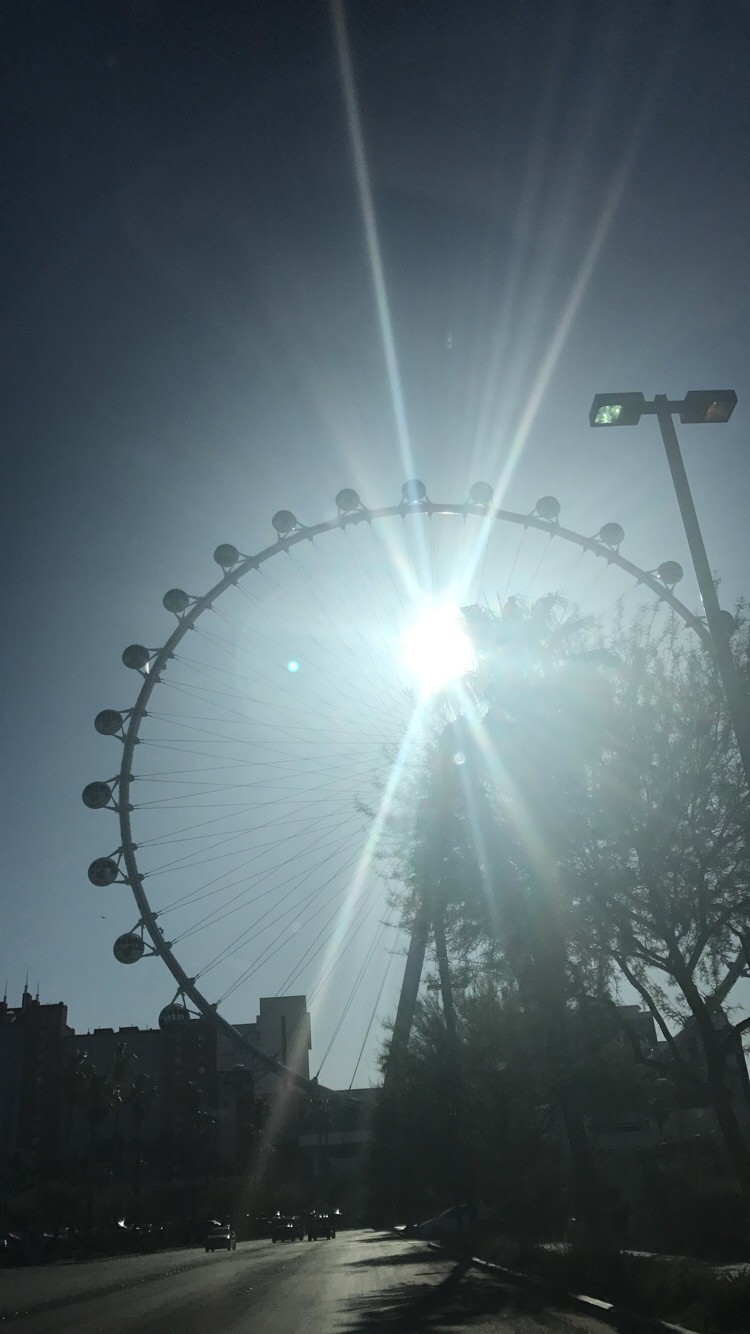 DAY THREE: Feeling a little groggy to start off from a long day in the sun yesterday and a long night at the club, but that isn’t stopping me in Vegas! Off to brunch again, with UNLIMITED mimosas! I think I’m in heaven!! After, heading to the pool with about a pound of sunscreen is in the books! Post pool, we decided to check out the Stratosphere, where I fearlessly decide to ride some rides… Although I may have seen some of the most amazing views, I may have passed out on the Giant Drop. All in all, these were some of the best views I had in Las Vegas.

Post Stratosphere we decided to make our away to get something to eat. We end up at Guy Fieri’s Las Vegas Kitchen & Bar, where I had the most amazing onion ring burger I’ve ever had. Highly recommend this place if you get the chance!! After dinner, we decide to end the night at Carnival Court, which was an amazing experience. I listened to one of the best bands I’ve ever heard, drank lots of Angry Orchard Cider, and danced the night away.